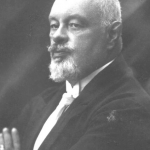 Alexey Vasilyevich Hanzen was born 31.01. (19.01) 1876 in Odessa) – and died 19.10.1937 in Dubrovnik (Croatia). The seascape painter, the professor, the collector, the artist of the Sea ministry of Russia, the court counsellor by seniority, the Honorary member of the children’s home trusteeship, one of three I.K.Ayvazovsky grandsons, who became painters, son of his second daughter Maria. He had following awards: St. Anna 3 class, St. Stanislav of 2 and 3 class, a light-bronze medal in memory of 300 anniversary of the Reign of Romanov’s House, the French decoration “Offizier d’Academie”, and also the award “Mention honorable” for the picture “Black Sea” (Paris, 1907). Hanzen graduated from the law department of Imperial university of Novorossiysk in Odessa. From 1900 to 1917 serves in the civil service in the Department of institutions of Empress Maria, and 1915 he passes to the service of the Sea ministry as the artist of the main naval staff of Russia and at the same time he doesn’t leave the civil service. A.Hanzen studied painting from K.Zaltzman, P. Meyergeym in Germany, then in Paris from E.Rober-Fleury and G.Lefevre. He graduated from the Berlin and Dresden Academies of fine arts. Hanzen was a member of the International Association of watercolorists, the Association of engraving, the Russian society of artists in Paris, the society “Association of Artists”. Hanzen was the participant of numerous exhibitions: TURH in Odessa and Spring exhibitions in Academy of Arts (1898-1904); big Berlin exhibition (1903); exhibitions in Venice, Florence (1904-1907); exhibitions in the gallery “International Art Galleri” (1910), in Lemercier’s (1913) gallery, art exhibitions of the society of russian watercolorists; the art exhibition “War”, and since 1920, being in emigration and living in Dubrovnik, he is exhibits in Zagreb, Rome, Prague, Osijek, Subotica, Belgrad, Buenos Aires (twice), Rio de Janeiro, Bucharest. A.V.Hanzen had personal exhibitions in Paris (1908, 1929). He painted pictures on Russian-Japanese war (1904-1905); illustrated events of World War I (1914-1917) and the album “Russian Imperial Fleet” (St.Petersburg), the book of rear admiral Bubnov A.D. “History of naval art” (1933, Zagreb). Alexey Hanzen was published in the magazines “New Time”, “War Chronicle”, “Spark”, “Field”, “Sun of Russia”. Since 1910 for the purpose of opening an art gallery in Odessa, like the gallery of his grandfather I.K.Ayvazovsky, he purchased pictures of Russian and European artists. The collection numbered nearly 400 canvas among which there were Ayvazovsky, Rembrandt, Menier, Mayer, Eberle, Rafalt, Roerich, Burdanov, Brodsky works, Dobuzhinsky, Vrubel, etc. A.V.Hanzen emigrated from Russia in January, 1920 and till his death he lived in the country house in Dubrovnik. He was married for the first time to the widow Muruzi Olympiada Vladimirovna.           (From Irena Kazatskaya)                                                         ←Return to Lattry Family.

“Cousin Alexis was having a small house with a studio built on the proceeds of his picture exhibitions in Zagreb.      King Alexander of Yugoslavia bought many of his marine paintings and asked him to become a Yugoslav subject.   He often invited him to the  palace in Belgrade.   The first visit was quite embarrassing apparently, it was raining heavily and Cousin Alexis only had one suit and a thin coat.   So he stuffed newspapers into this shoes and coat sleeves, and when he had to take the coat off the sopping wet newspaper wriggling out of his shoes.   Although visiting each other was like a day long trip, we saw a lot of the Hanzens.  `Alexis had inherited from his Aivazovsky Grandfather a fascination for the sea, but having a lovely nature his pictures were never as violent.  (I have two of them)”.  (From the memoirs of Pr. Gayane Mickeladze.) 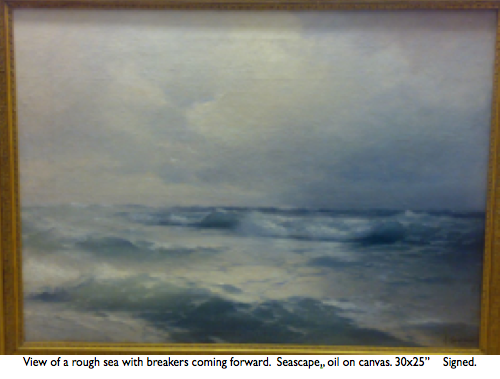 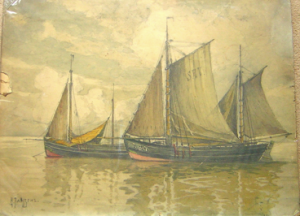 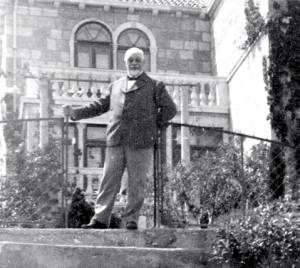 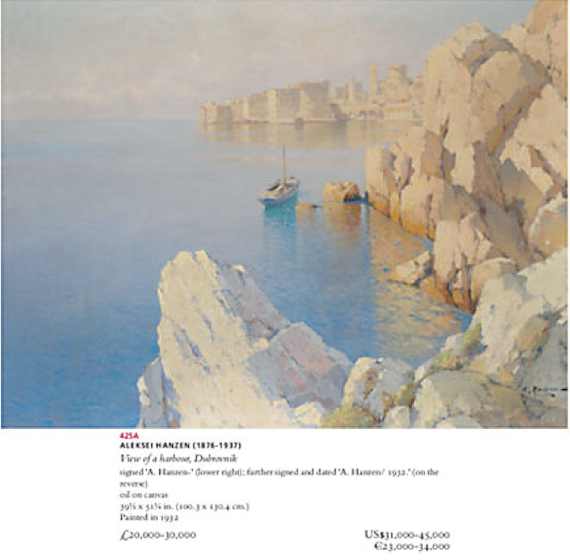 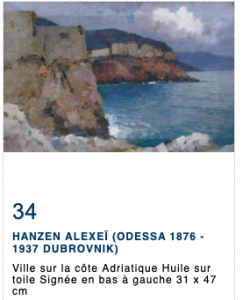