An EXHIBITION OF HIS WORK    from the collection of a member. 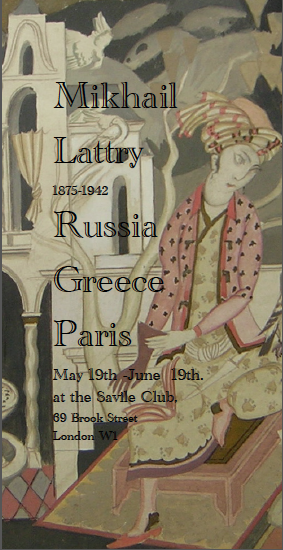 One can only imagine that Lattry, widely travelled, though particularly associated with Russia and France, and something of an artistic polymath, would have appreciated finding himself in rooms enjoyed by a dozen or so Nobel prizewinners.     Its original raison d’etre was very much a literary one, with early members including Thomas Hardy, Robert Louis Stevenson, H.G.Wells, Rudyard Kipling, Rider Haggard and W.B.Yeats, and that has continued to the present day, through Max Beerbohm and Compton Mackenzie to V.S.Pritchett and C.P.Snow.

Over the years, this literary core was augmented by distinguished musicians, among them Arthur Bliss, William Walton and Edward Elgar, and by world-famous scientists including Lords Kelvin and Rutherford, and John Cockcroft. Today, of necessity, the nature of its membership has been expanded to include film-makers, journalists, politicians and businessmen.

Photo of Natasha Arendt and her daughter Ariadne at the Savile opening. 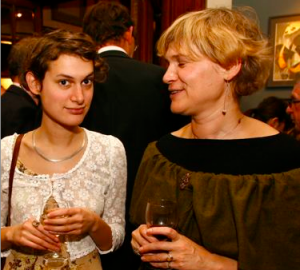 Herself a distinguished artist, she provided much archival material for this website.

Dr Henry Sanford, a gt nephew of Mischa Lattry, with his wife and daughter, Marietta, now a doctor.  Also Natalia Sidlina, an art historian and Christies expert who helped with the exhibition (see in video, above).

The small painting in the background is an exquisite Aivazovsky work.  It was rescued from the Mickeladze home by Mischa and Iverico Mickeladze.   It had been slashed when the house was looted during the revolution. 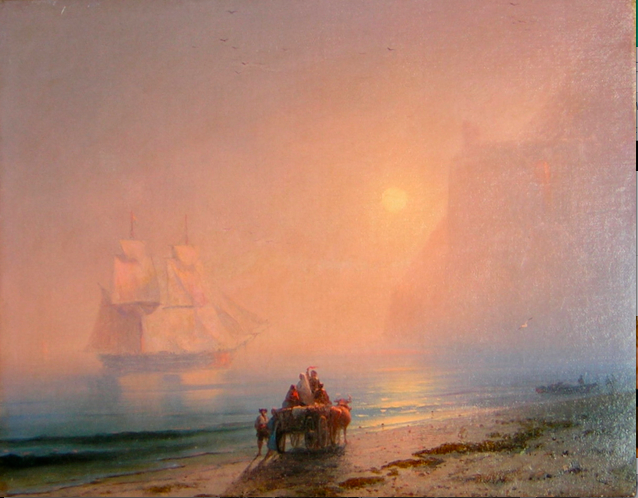 From the memoirs of Alia Aivazovsky, Mischa’s younger brother.    In1920,having escaped from the revolution, I was in Constantinople, and was invited to see Fouad Bey, grandpa’s old friend. ….On the wall was one of grandfathers  paintings.   I looked at it with wonder.  The more I looked at it the more I was filled with a sense of  extraordinary tranquillity.  It was not a big picture, and it was entitled “Fog”.  Through the mist one could  detect a sailing ship.  I could not imagine how a paint brush could create such soft air, and such a feeling of calm and peace.   It was the finest works of art that I could imagine.

When I was able to drag myself away from this magical picture, I saw that my host was watching me.   He said, “I am so glad that that you appreciate it so much.   You felt the same way that I do.   You see, I have an armchair in front of it.   Do you know why?  Because when I feel depressed or worried by something, I  come and sit here in front of this picture and it calms me and makes me so peaceful that I come out quite refreshed.”   Alia Aivazovsky’s mems.   Probably describing a similar version.  HAS